Leave a comment
By Writing Laura People and Places, Uncategorized

Parts of Canada we seldom see

My friend Charlotte and I went to the opening of the medium gallery (yes, it’s all lower case) in the Old East business district on Saturday night.  In 2011 a photographer, Johan Hallberg-Campbell, had flown into the bush of northern Ontario with the Canadian Red Cross to photograph their efforts to supply Attawapiskat with sleeping bags, heaters and winter clothing. 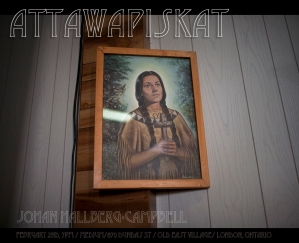 This poster photo is the least representative of the exhibit, a romantic, christianized image, and it was placed next to a photo of a beautiful but very sad young woman living in the crawl space beneath the floor of a house, her arms marked by cutting.

Hallberg-Cambell said, to paraphrase, that while he was in Attawapiskat, he didn’t want to traumatize the citizens there.  He found them to be gentle and kind people, and he knew the general media was using images for articles that would result in misunderstandings, or misrepresentations, that would further politicize the situation.  The images he chose for the exhibit were personal and sincere. It was well worth the visit.

Years ago I lived on another northern Cree reserve in housing that was trucked in, just as the housing is being trucked into Attawapiskat.  The 3 months I spent at the Red Earth IR have had a huge impact on me.

The newly built high school and two 4-plexes for used offices and teacher housing on the Red Earth IR, Saskatchewan.  The only new buildings I saw on the reserve.

The trailer I lived in while teaching in Red Earth, Saskatchewan, newly trucked in and waiting for insulation and skirting.

The housing I lived in was considered “new” housing on the reserve, a used trailer with frustration already punched into the walls. The gas for the stove came from a big propane tank that looked like a bomb at the edge of the clearing, beside the tree that the bear liked to maul. Our neighbour in the next trailer had a small gas explosion after he came home and lit the pilot light.  The hospital was over 80 km away, but luckily his burns weren’t severe.  And we were teachers, told that our housing was “nicer” than most of the residents.

As the seasons turned from Saskatchewan prairie summer to fall and then winter, I came to know more about the resiliency of the people who held on despite the incredible patronizing system that kept the once vibrant community dysfunctional for decades. I can relate to how Halleberg-Campbell photographed both the life-threatening poverty, the trauma and the beauty of the gentle souls in Attawapiskat.

Horses were still part of the treaty agreement on Red Earth 29, and they mostly ran in a herd fending for themselves against wolves and bears. The Cree still rode them, just had to round them up first.

All those years ago I was shocked at discovering the biggest “secret” in the Canadian family closet.  The missionaries of my childhood church had us folding bandages and diapers, collecting school supplies and donations for Africa.  Our grannies should have have been knitting and praying for those on the reserve I worked at. I didn’t know third world conditions existed in Canada.  Our schools should have told us about contemporary “Indians.”  Our treatment of them remains appallingly political and needless to say, less than christian.  As a direct result, I became a feminist, an atheist, an activist.

The medium gallery is part of a community economic development project in the Old East area of London, Ontario, where a large percentage of the residents are also struggling with neglect, poverty, mental health, drugs and prostitution.  The anti-poverty advocacy group, Life*Spin has spear-headed this new development.  Their neighbour, Artisan Bakery, also opened on the same night.