There was a nice green t-shirt in my dresser drawer.  Nice, but I never wore it because … well … I didn’t like it.  An indefinable not-liking.

It became unwearable last November when I dissected it.  By picking apart the features that bothered me, I hoped to learn more about its character and nature.  The colour was great.  But not the band around the bottom and not the little gathered bit in front.  Surely there was a better way to put this garment together.

The interesting thing about dissection is that one knows it won’t go back together the same way. Ever. It’s like getting the recipe for a favourite dish a friend makes, and you have all the ingredients, but it doesn’t taste the same as your friends when you make it.  It’s like when a friend, spouse, family member shares something that’s normally hidden.  You can maintain the routines and habits, but the person is different, the relationship is different.  It’s risky to share, to look at the underside or inner workings.  I could truly wreck the t-shirt, but that was cool.  It was stuck in a drawer anyway.  Although, Goodwill or some other recycling enterprise might have found a better home for it.

So a choice had to made:  throw it out or reinvent.

And there the green tee sat on my workroom table next to a bright green and orange print fabric from already cannibalized blouse which had three really cute, tiny covered buttons.  The t-shirt sat for the whole month of December in the flurry of holiday card making and last minute sewing, flirting with the green bits in a brown print skirt, destined to be remodeled in 2013, or 2014. 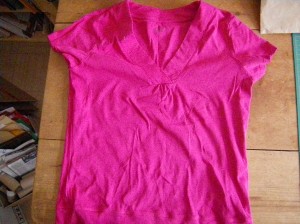 Same nice t-shirt as the green with the original styling.

Reinvented, and it really is a bright Kelly green as you can see from the sister tee above.

So as the snow fell in January, the plain, proper, nice little t-shirt was reinvented into something a little different.  I will wear it now because it’s gone from nice to being fun.  It has some depth.  And if it had a voice, I could hear it praying for me to finish the brown print skirt, which was finished but also in need an intervention and became another victim of dissection by seam-ripper.  The skirt was nice, but not fun. Not flirty, or flattering … or interesting enough to wear.