I didn’t know what I was getting into when I emailed a woman about her advertisement for free copy editing in the London Writers’ Society newsletter.  She turned out to have a good eye for missed words, inaccurate spelling, and phrasing that could be better.  Sue had a background in speech pathology, she told me over our first cup of tea.  She was from Stratford, at least that’s where her parents had lived the longest, where she graduated from high school.  I was from Stratford too, I told her, but we were a number of years apart in age, and didn’t have any real connection that way. 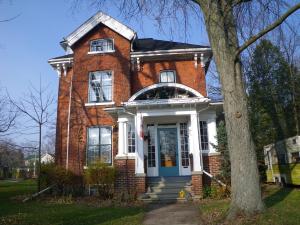 Then we discovered we had lived in the same house.  Her family had come from a small town and her father was to become a high school principal.  My family came from Toronto and my father would become the VP Finance for a furniture manufacturer.   Our families’ first homes in Stratford were the same place, on the second floor at 198 Church Street.

Sue remembers her mom getting groceries delivered from the corner store and her grandfather having a room in the attic.  I was only four, but I remember the bats descending from the attic into the living room, and the sturdy crab apple tree where my brother got caught in the branches with his winter coat and swung from it, as though he was in a cartoon.

Neither family stayed long.  We moved kitty-corner through the block to rent a whole house on the corner of Birmingham and St. David streets until our new house in the suburbs was built.  Sue’s family moved to Mornington Avenue across the street from St. James Church.

Apparently there was a pattern for professionals with families immigrating to Stratford.  Perhaps first, they had to pass through 198 Church, second floor.